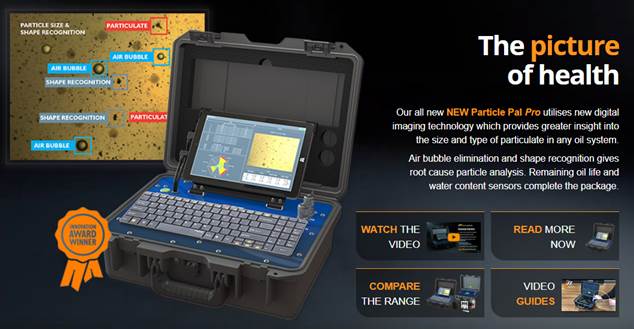 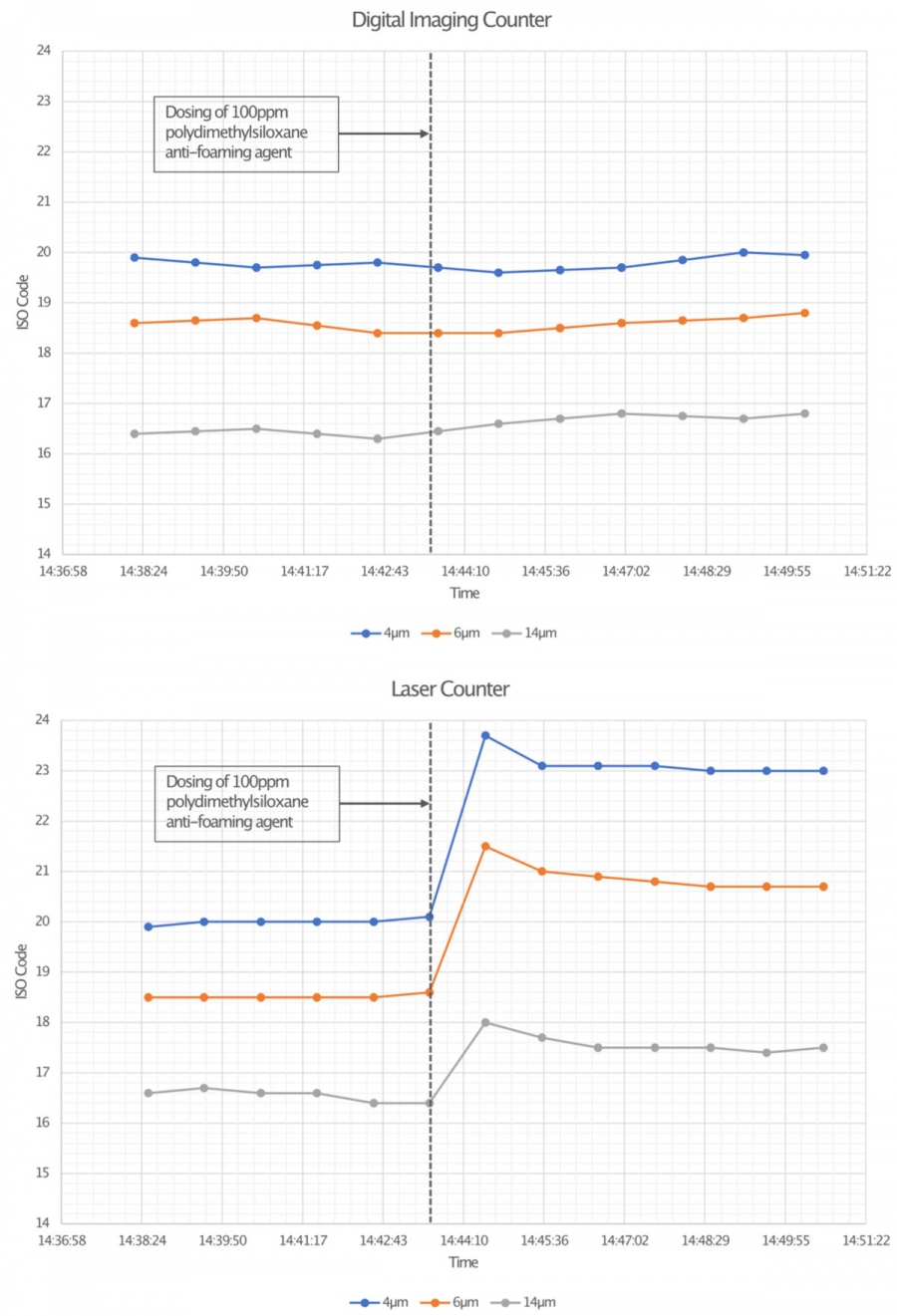 The S120 Digital Imaging Particle Counter is a huge step forwards in accurate determination of oil and diesel fuel Particle counting using revolutionary new digital imaging and advanced algorithyms to analyse particles on the fly. A wider particulate size categorisation (4, 6, 14, 21, 38, 70 and >100 microns are counted and categorised) as well as shape recognition sorting particles 20 microns and above into; Sliding, Cutting and Fatigue Wear.  An additional major feature is bubble recognition and elimination from ISO counts.

Filtertechnik have conducted extensive testing of both Digital Imaging and Laser counting when Siloxane based anti-foaming additives are present in mineral oil, especially polydimethylsiloxane, a common additive to hydraulic oils. This additive causes phantom particle counts with laser counters but not with digital imaging. For more information on this phenomenon please click here.

At the heart of our laser counting equipment is the PC9001 instrument. Utilising the exact same laser particle counting technology found in more expensive laboratory particle counting equipment, the PC9001 gives live readings of ISO, NAS or SAE readings. It is rated for continual use in industrial applications and is the ideal monitor to flag sudden changes in an oil condition. Accuracy is +/- 0.5 an ISO code.

We offer various portable particle counters which use both Laser and Digital Imaging technology.  All particle Pal units are manufactured in Nottingham, the range is detailed below and have a much improved feature set:

To view all of our quality control and instrumentation click here

Filtertechnik's Particle Pal range for oil and diesel fuel testing utilises both Laser Particle counters (FS9V2) and new Digital Imaging Particle Counters (FS9V3). The below grid shows the models available, mostly from stock. We can also supply units with genuine RH water sensing for oils and diesel fuels (once calibrated it will only be accurate on the calibrated fluid).

For more information, please select the from the models below. For pricing information please contact sales@asithailand.com 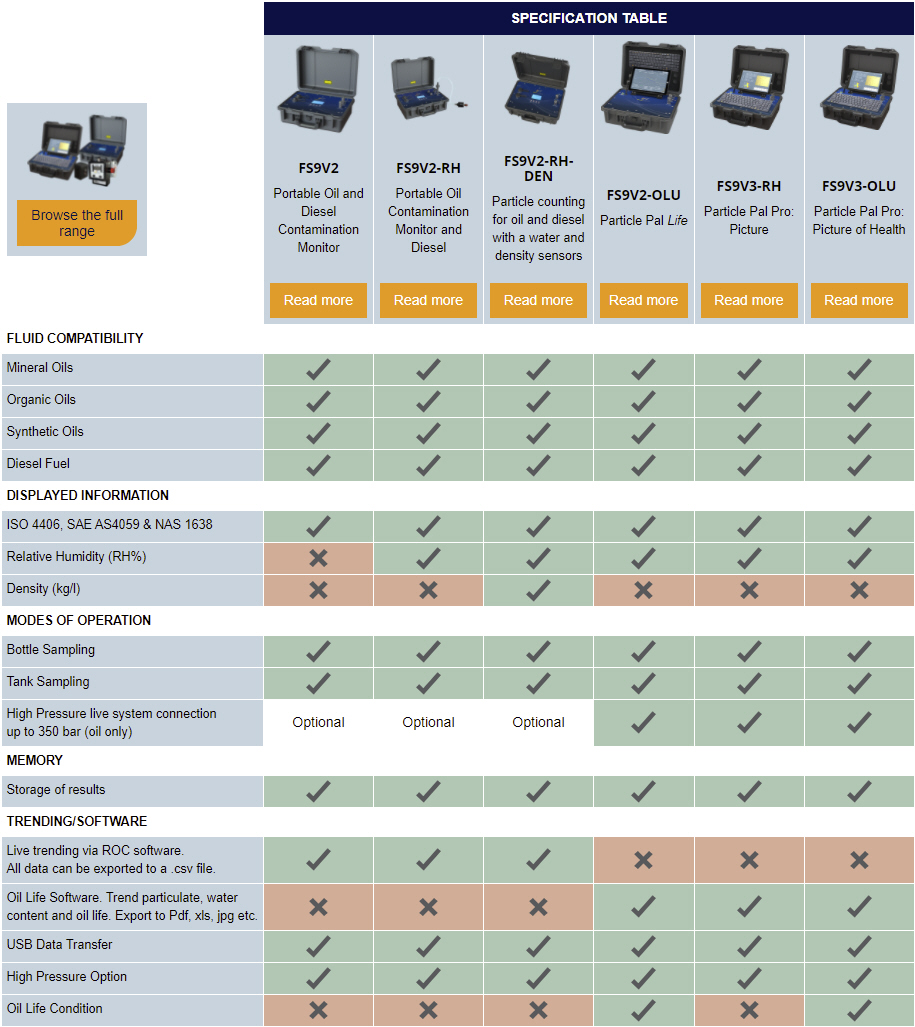 Filtertechnik have developed a portfolio of products for accurate real-time monitoring of Particulate, Water Content and Remaining Life for Oil and diesel fuels.

PC9001: On-line laser Particle Counter
At the heart of our laser counting equipment is the PC9001 instrument. Utilising the exact same laser particle counting technology found in more expensive laboratory particle counting equipment, the PC9001 gives live readings of ISO, NAS or SAE readings. It is rated for continual use in industrial applications and is the ideal monitor to flag sudden changes in an oil condition. Accuracy is +/- half an ISO code.

Particle Pal Range
The PC9001's incredible technology is built into our range of portable particle monitors, manufactured in Nottingham, the range is detailed below and have a much improved feature set:

To view all of our quality control and instrumentation click here

The revolutionary new Digital Imaging particle counting technique gives unprecedented insight into the type and quantity of contamination in any given oil or diesel fuel sample. ISO/NAS/SAE counts as well as a broader micron range, shape recognition, bubble elimination and the ability to handle higher viscosities.

This breakthrough technology uses advanced algorithms to calculate the size and shape of particulate on images taken at between 2 & 4 frames/second. The technology also gives root cause shape recognition to the particulate in live systems or bottle samples of any oil. Special algorithms and AI analyse images on the fly with a resolution of 2 microns up to several hundred microns.  High-resolution images are saved for further analysis and reporting such as the one above.

Particles are counted and categorised into Fatigue, Sliding or Cutting Wear. Air Bubbles and Water Droplets are counted and then eliminated from the counts making this suitable for live testing or permanent installation on systems where air is present such as large gearboxes.  In addition, anti-foaming additives such as polydimethylsiloxane are not counted as particles by digital imaging, this is a major advantage over Laser Particle counters which see's the micelle-like formations created by this additive as contamination, these are phantom particles, often resulting in particle counts being raised by 2 to 3 ISO codes, especially the 4 and 6 micron channels.

Filtertechnik supply the S120 counter as a stand-alone particle counter for integration into live systems for 24/7 monitoring. Alternatively, we have developed a range of portable oil analysis cases designed to give on the spot oil analysis and a deep understanding of the type and quantity of contamination in any given oil sample. Built-in software takes readings from the new digital imaging technology and presents Engineers with an easy to understand analysis including images of contamination in the oil sample.

Filtertechnik offer two types of water sensors for determining the quantity of water in oils, fuels and biofuels; our RH sensors and our WMS500 PPM sensors

RH Water Monitor: Our RH (Relative Humidity) water monitor gives the percent saturation of a given fluid. 100% saturation is the point at which suspended water becomes harmful free water. These sensors are lower cost and are very useful for hydraulic applications. Outputs are scaled and 4-20mA.

WMS500 PPM Sensor: Our Genuine PPM sensors are highly accurate parts per million (PPM) sensors and are particularly useful for transformer oils and diesel fuels or biofuel. The sensors are calibrated to a Karl Fischer device and fully temperature compensated.

To understand the different relationships between %RH and PPM please see below:

Relative Humidity or RH is expressed as a percentage. 100% RH equates to the maximum amount a given oil or fuel can hold (absorbed water) before it becomes saturated and free water forms.

To view all our quality control and instrumentation click here

The increased use of siloxane based anti-foaming agents is causing issues with laser counter technology.

IMAGINE THIS: You have been filtering 150 litres of hydraulic fluid off-line with staged 5 and 1 micron filter elements at a rate of 25 litres per minute (1,500 litres per hour). You have been using a laser light-blockage method (LBM), automatic particle counter to verify the fluid cleanliness. The starting cleanliness per ISO 4406:2017 was 25/22/15. After eight hours, the cleanliness has only dropped to 22/20/13. You've checked that the filter element is not clogged and not in bypass. You even went through the trouble of making sure there was an element actually in the filter. How is this possible? What you're likely experiencing is a classic case of "phantom" particle counting.

Phantom particle counting is a documented problem, encountered when using laser-based LBM particle counters to verify the cleanliness of mineral based fluids containing certain insoluble additives. Silicone-based antifoam agents such as polydimethylsiloxane are common additives causing problems. Fluids used in mobile fluid power systems are typically formulated to contain high antifoam concentrations. Research has suggested that through differential surface tension, the silicone-based antifoam additive agents adhere to the inner wall of microscopic, entrained air bubbles, resulting in micelle-like encapsulations of the additive agents that then take on the apparent shape characteristics of a water droplet. The micelle-like antifoam agent encapsulations typically range in 4-10µm in size. Once the encapsulations rise to the fluid surface, the agents quickly pierce the air bubble and return back into the fluid. In a related study on the effects of a variety of nonsolid contaminants and additives on LBM particle-counting accuracy, it was found that a base stock mixture containing 0.02% (by weight) of a silicone antifoam agent increased the particle count by a minimum factor of three. The erroneous particle accounts were particularly evident in the 4µm and 6µm channels of the ISO 4406 cleanliness standard.

Light blocking method (LBM) Laser particle counters are useful in many applications and the principle of the method is fundamentally simple. Fluid flows through a measurement cell containing a light source on one side and a receiver (photodetector) on the opposite side. The light source becomes partially blocked as particles pass through the measurement cell, creating a light radiation differential (a shadow) – corresponding to the circular cross-sectional size of the passing particles. Because of this fundamental operating principle, LBM particle counters suffer from a key drawback: the inability to discern solid contaminants from other contaminants such as water, air bubbles, phantom particles, and so on. So, how can the phantom particles be overcome using automatic particle-counting technology? There is an alternative solution.

The S120 digital imaging particle counter can recognise solid particles and summarize them into 4, 6, 14, 21, 38, 70 and >100 micron ranges. It can also recognise shapes and give individual shape recognition counts as sliding, cutting and fatigue wear particles. Bubbles are also recognised and removed from the counts. 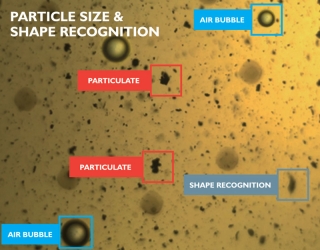 In a lab-based test conducted on base oil with no additives, Filtertechnik ran 2 particle counters feeding from the same oil warmed to 40°C. A PC9001 laser counter and an S120 digital imaging particle counter. Filtertechnik then dosed in exactly 100ppm polydimethylsiloxane anti foaming additive. The results were immediately apparent in the laser counter, affecting the 4 and 6 micron counts by up to 3 ISO codes, the 14 micron count slightly less so, but still an increase of 1 ISO code. The digital imaging counter remained unaffected by the additive.

An OEM of large off-highway equipment was experiencing continuous particle counter inaccuracies at a verification stage of assembly. The rejections due to fluid condition were mounting, causing delayed shipments and significant related costs. The average holding time delay due to rejection was seven days, which incurred a holding cost of £1,000-a-day per unit. At the consultation phase of the case study, eight units had been delayed.

The diagnosis was in: the existing laser light-blockage-type particle counters were providing inconsistently high and erroneous particle counts. The ISO 4406 cleanliness would frequently measure 23/22/19, despite a strong fluid-maintenance and conditioning regime. Third-party fluid analysis reports and fluid datasheets suggested that the synthetic hydraulic fluid contained a high concentration of a siloxane (silicone derivative) antifoaming additive, known to cause phantom particle measurements in LBM automatic particle counters.

Filtertechnik provided an extensive on-site demonstration that proved the advanced digital imaging technology of the Particle Pal Pro portable fluid contamination monitoring solution, which measured an average ISO fluid cleanliness of 15/14/10. This allowed the customer to successfully process the fluid and pass six units during the first day of demonstration. The two remaining backlogged units passed early on the second day of demonstration. The savings evidenced by the demonstration equated to approximately 35% in cost savings and an 81% reduction in holding time.

For more information on the Particle Pal Pro click here